Teams at both sides of the Echigo Plain’s Nanokuchi River (river width: 80 meters [262.5 ft], —a tributary of the Shinano—do battle with gargantuan kites, typically on the order of 40 sq. meters (430 sq. feet). The kites collide and crash into the river, as teams continue pulling in attempt to break the ropes of their opponents. The event is said to have started in the middle of the Edo period, when residents on the east bank sent up a large kite, provided by their feudal lord, to beseech the spirits for successful completion of ongoing embankment repairs. Alas, the kite crashed on the other side of the river, causing damage to homes and crops, and rousing the angry residents on that side to send up their own kites in retaliation. 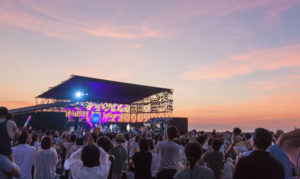